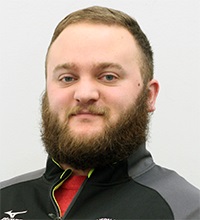 In His Own Words:

I’m excited to see everyone back in the gym soon!

Pat Madia began coaching for Northern Lights in the summer of 2017 and joined the full-time staff one year later.  He has served one year as the 15’s lead coach and has been a head coach for 15-White and 17-2 teams, and assisted with the 15-2 team.

A native of Buffalo, NY, Pat coached for nine years for Niagara Frontier Volleyball prior to moving to Minnesota.  He also served as the head coach of the Academe of Aurora Panthers for two seasons and as program assistant coach for St. Joseph’s Collegiate Institute for six years.

Pat is able to coach all volleyball skills, but especially enjoys working with setters (the position he played).  Pat is also USA Volleyball Cap II certified.